Today’s item is the Helikon-Tex Windrunner jacket. It’s a very lightweight, extremely packable jacket that’s a bit different from other jackets you know.

First of all, it’s light. I mean, extremely light. And extremely packable. I know, I said that before but you can’t emphasize it enough. I mean extremely. And that’s it’s main feature. You can just put it in your bag or even the cargo pockets of your pants just in case you might need an extra layer of protection. 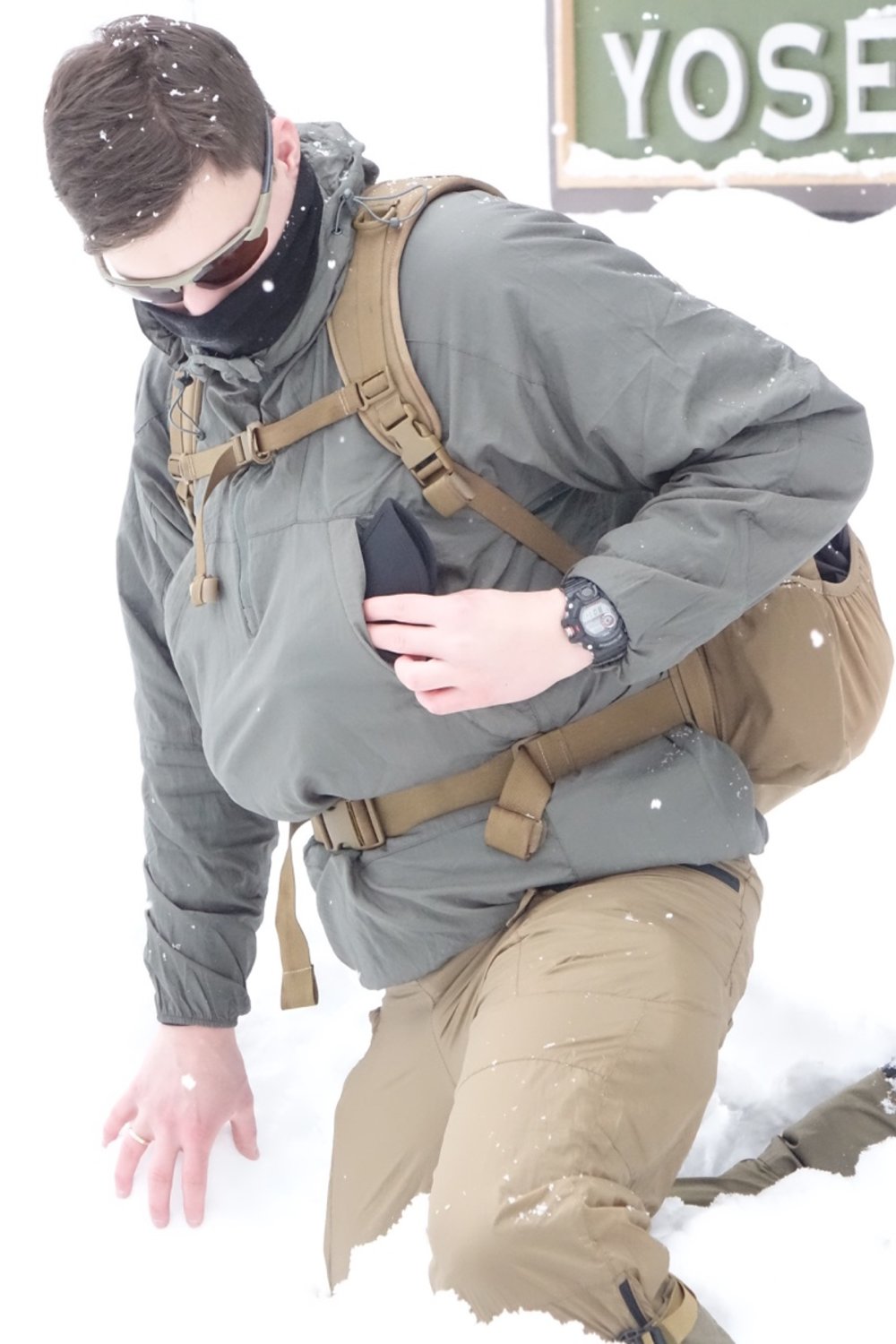 What comes with this lightness is that the jacket consists of a single layer of fabric and no stuffing. Think of it as a modern descendant of 1980’s windbreakers. Ok, not everyone liked those but this new implementation has a lot of improvements.

First of all, it’s breathable. You won’t be sweating like in a sauna when you’re wearing one. The fabric is softer and feels better. And it’s far better compressible.

So what is it for, then? The Windrunner works best if you’re unsure if you’re gonna need a jacket or not. Think of being out and about for a longer time on days in spring and autumn. During the day it’s still warm and you don’t want to get weighed down by a jacket. But early in the morning, late in the evening, near rivers or in windy conditions it might get chilly. That’s where the Windrunner comes in handy. Especially with it’s wind stopping fabric it helps to reduce windchill which could easily change a nice day into some freezing misery. Because of that it also makes a great addition to a very warm, but not very windproof layer like a fleece jacket. Just put the Windrunner over it and you end up with a warm and windproof solution. If you enter a place without wind like a wood you can always remove the Windrunner for extra breathability.

You should just know it’s limits. It’s not windproof like a membrane but it will keep the windchill effect to a minimum. Even though it’s a minimal design it still has some features you’d wish for. There are drawstrings for adjustment in the hood and at the waist. The cuffs at the end of the arms are elastic just as the seam at the waist. Together with the adjustable hood and the high rising YKK zipper this should make sure that wind is not going in somewhere.

The jacket has one big kangaroo pocket in the front which is accessible from both sides and closed with two zippers. Inside this pocket there are two smaller pockets for organization. The Windrunner is not built to carry heavy loads so the main function of the kangaroo pocket is to have something you can put your hands into to keep them out of the wind.

The hood has a small visor which can help with keeping away light rain. While the jacket is all but waterproof with its DWR coating it can help with staying dry in light showers.

The zipper goes over 1/3 of the front so you will have to pull the jacket over your head. This adds up to less entrypoints for wind.

Inside, just above the waistline is a small mesh pocket which is not reachable when you’re wearing the jacket. While you can use it a as some sort of hidden stash for valuables the main function of this pocket is that you can compress the whole jacket into it. This way you end up with a “ball” of fabric you can easily stow almost anywhere. 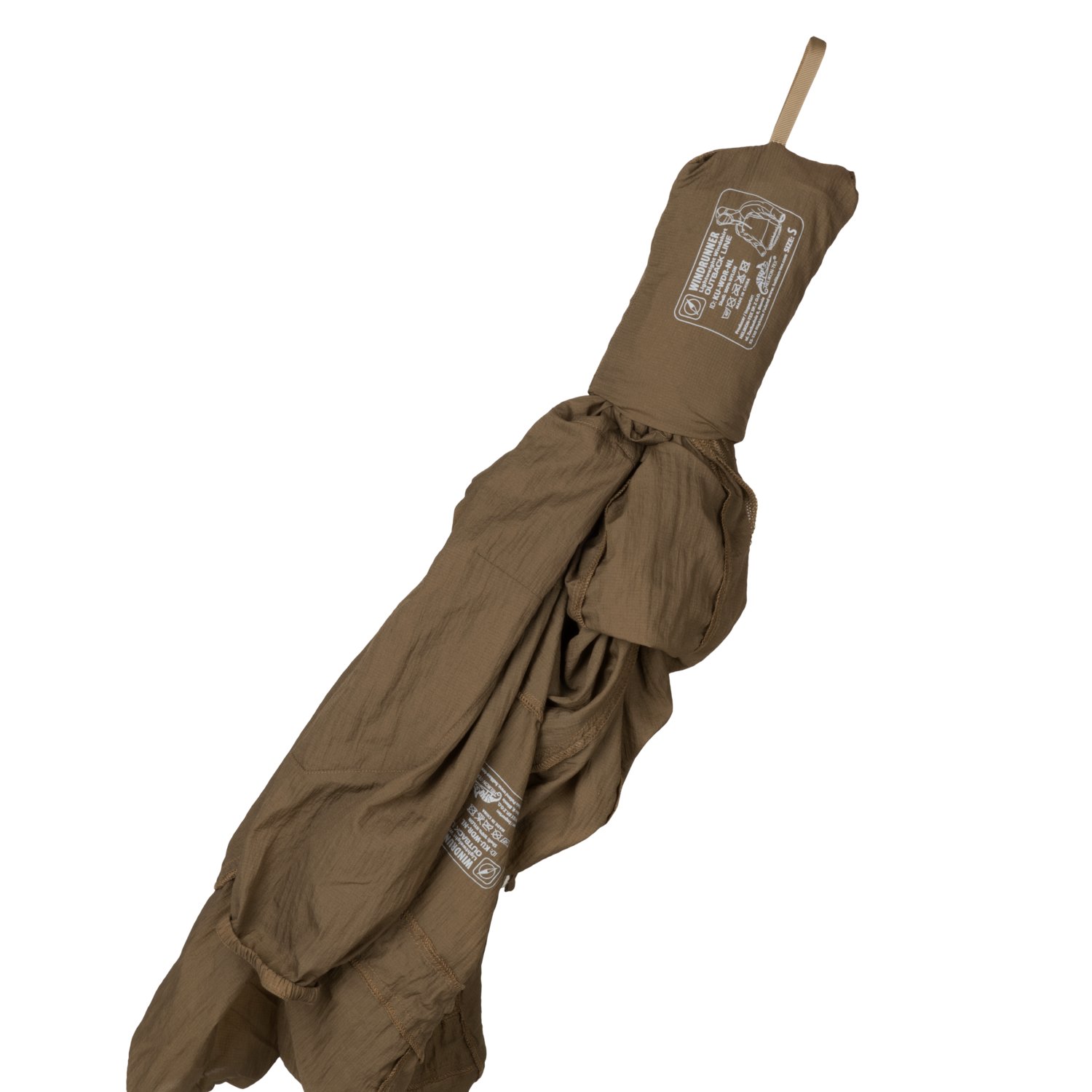 There’s mesh in the armpits so the tight woven fabric and the tight cuffs won’t add up to you being covered in sweat when you use the jacket during training. Its very lose fit makes it a great outer layer while exercising outdoors. You can move easily and you have enough air between the jacket and your body. It almost feels like a very light summers shirt with all openings sealed tight.

No matter where you plan to use the Windrunner you will find a colorway that fits your needs. Besides the usual solid colors there is PenCott WildWood and if you don’t like PenCott (but who wouldn’t) there’s even Flecktarn (a.k.a 5 Farben Tarndruck).

How I use it

I have to admit that when I first read about the Windrunner I wasn’t impressed at all. I didn’t think that I could make any use of a jacket this light. But one day I got to lay my hands on a second hand Windrunner so I gave it a chance. In the end I ended up with owning it in two different colorways because it became one of those items I end up using frequently without giving them too much thought.

I’m traveling a lot and that brings the problem that many trains are either way too hot or chilling cold in the summer. So I tend to travel with moisture wicking shirts and a very light jacket like the Windrunner. This way I can adapt to whatever awaits me in a train. Same goes for travels that start very early in the morning. This specific jacket helps to not end up with a bulky softshell or combat blouse to carry around all day but still have some extra insulation.

My favorite use of the Windrunner jacket is when I use an extremely breathable fleece jacket. This thing is quite warm but it’s so breathable that even walking fast lets you feel the windchill. Putting the Windrunner over it makes for the perfect onion-style combination.

I like to wear camo but I rarely go full camo in the city. So sometimes I start out hiking with camo pants and a uni color shirt. When I reach the woods I break out the Windrunner in PenCott WildWood and put it on. This way I can end up full camo in the outdoors without getting strange looks in more civilized areas.