We are back together, this time with a short guide on how to choose pants for yourself in our store offer. We start with the basics, so it is suitable also for those who aren’t familiar with the term ‘tactical’. Then we show you the main differences between military and tactical pants and their characteristics and basic purpose. Finally we conclude with a brief presentation of individual products in order to help you make the right decision for the right pair. We are sure regular customers and proud owners of multiple pairs of tactical/military pants will find the post useful as well.

BREAKING NEWS 2022-04-26: If you want your own pair of pants in the rather rare urban camo PenCott MetroPolis, then get in touch with Perunika immediately. There will be a very limited run of smocks in that awesome camo in the near future. It’s so limited that you should think about reserving a spot. If you need further motivation, check out Pinesurvey’s test of this awesome camo pattern.

In the Perunika online shop, all tactical and military pants can be found in the following category:

What exactly is tactical gear and clothing? 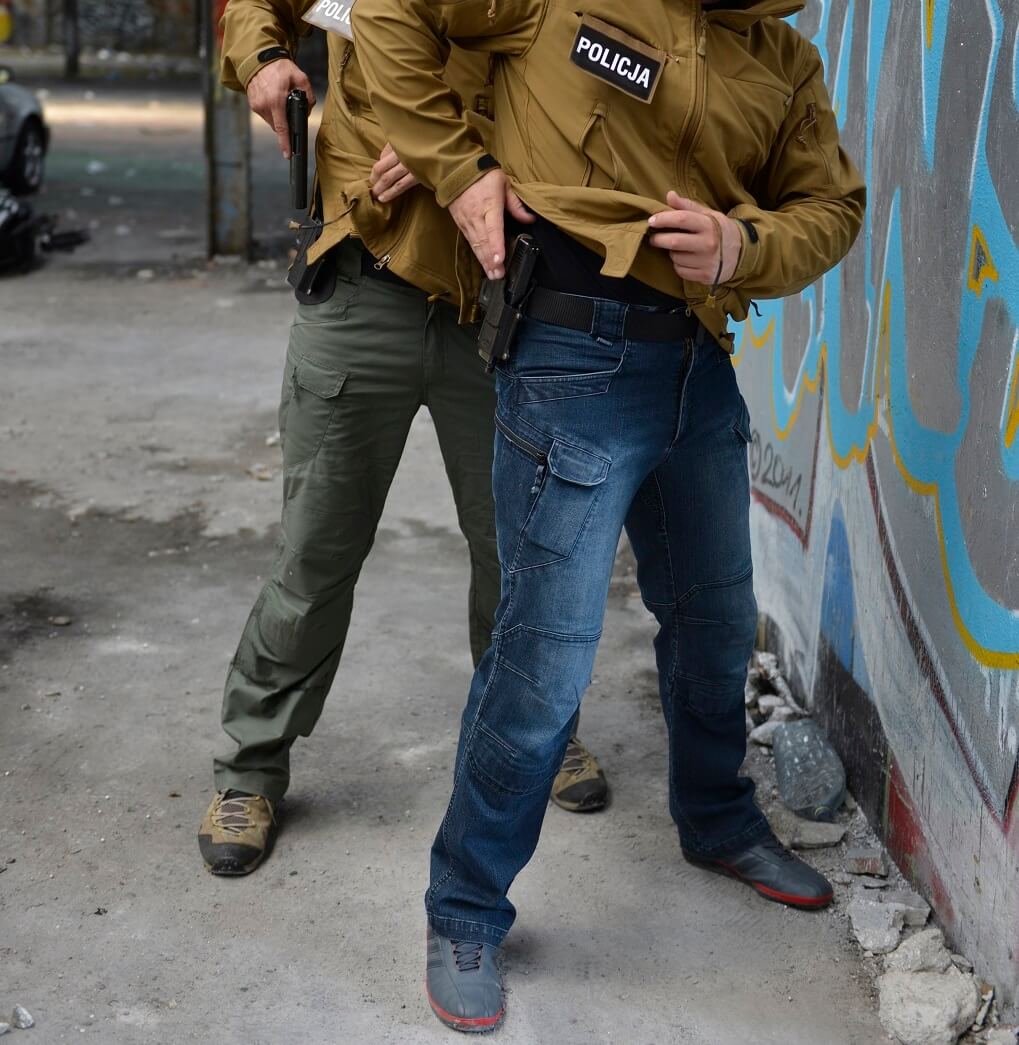 The term ‘tactical’ (tactical equipment, tactical clothing) is relatively young, certainly newer than ‘military’ (military equipment, military clothing) and is sometimes used as a synonym and sometimes an explicit distinction. And it causes grey heir. Why? Military gear is something self-evident, something that has always been used by the military and what we got our hands onto was the surplus. In most cases, used, but sufficiently preserved so that we could ‘recycle’ it, and in some cases (with a bit of luck), new.

Surplus became popular in the 80s and early 90s. A lot of producers we know today began their career as surplus dealers. Political systems and military structures changed and were replaced, together with uniforms, camouflage patterns, equipment etc. Armies were professionalized, conscription abolished (in many cases), which filled up warehouses with excess gear and suited up anyone wanting quality gear and clothing with long service life.

Although the military surplus still exists today, it has declined sharply. Resellers turned into manufacturers overnight; some were sewing themselves, some were outsourcing in Asia. A new market was born: one that recognized the need for high-quality equipment with functionality of military gear but purposely intended for the civilians; for everyday use as well as for professional one (security services, private military contractors, police etc.). New type of clothing and gear was developed, dedicated to the civil professional sphere and most importantly, independent of military trends and armed forces. Thus began the era of ‘tactical equipment and tactical clothing’.

So, how to draw a line between military pants and tactical ones? The truth is, there is no real definition. Their distinction is not a subject of profession but marketing departments. Some will declare jeans as military trousers, others prefer to market classic military uniform as a tactical one. Nowadays textile megacorporations push low-budget pants with a fake camouflage and sell them as military pants. With the rise of third-grade ‘army shops’, the quality dropped significantly, and most of clothes and equipment suddenly have nothing to do with military. 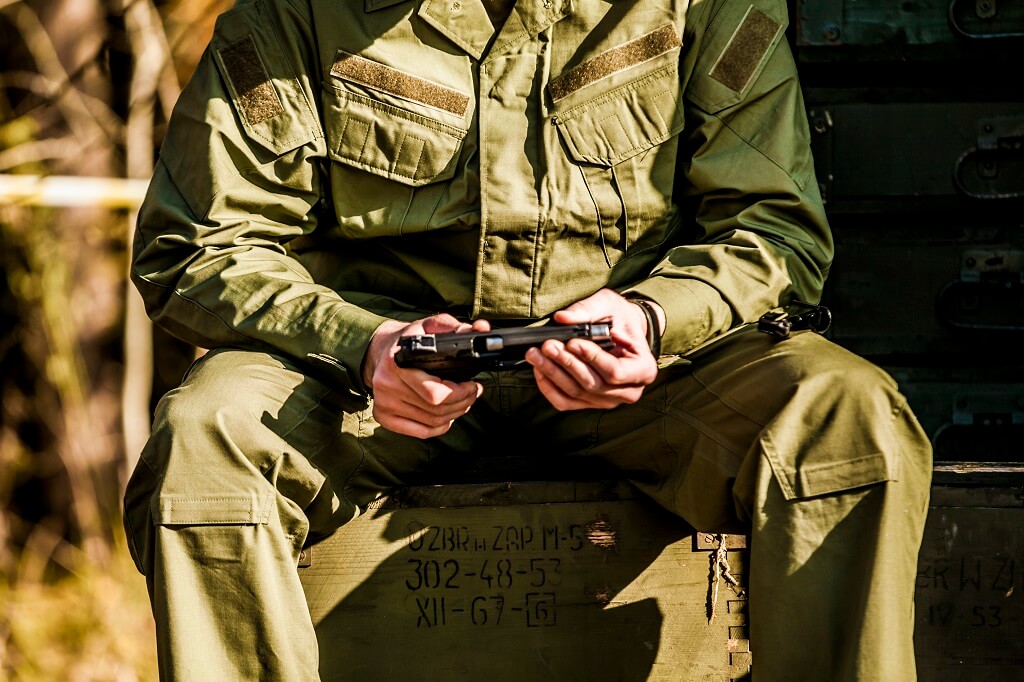 Military pants are usually heavier built and tougher than others

When talking about a product that the army wouldn’t be ashamed of, we cannot go wrong by saying military pants are just a lower part of the uniform. They are made of robust material, which has to endure demanding terrain, tactical movement, going prone, thorns, branches/bark, as well as urban areas (concrete, glass, steel etc.). This military functionality dictates a military uniform cut:

The material is usually thicker, more robust, but less elastic. The most commonly used mixture is cotton and polyester (poly-cotton) in different proportions (up to 65% of polyester or up to 65% of cotton) or more recent NYCO (cotton and nylon/polyamide, again in different proportions). The older models were reinforced with different weaving (canvas, twill, etc.) and nowaday almost everything is made of ripstop grid which prevents tearing of the material.

PS: Note that a lot of times producer deliberately replaces the term military pants with combat pants to emphasize the professional purpose of the pants and avoid the negative connotation of cheap army shops. 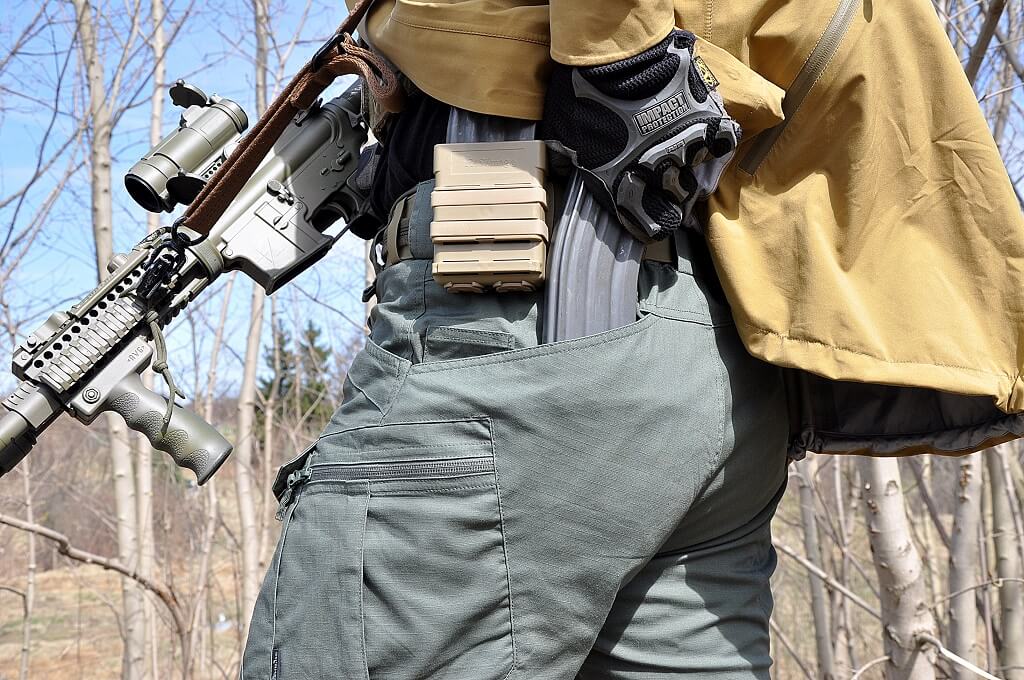 Both types of pants usually have tactical features like magazine pockets

The material is usually less thick, but the composition is the same and equally robust. The same materials (polycotton and NYCO) are used, but usually with a lower surface density (grammage). 100% cotton is almost completely dropped from military and tactical pants. Since the cut is narrower, the material has to be more elastic to allow running, squatting, going prone etc.

Which tactical or military pants should I choose?

Best way to start the nerve-wrecking selection is to ask ourselves a few questions: where will we use the pants, for work, for demanding terrain etc.? When will we wear it, in summer/winter, in bad weather, wind and rain? And lastly, what exactly are we expecting from our pants? Are we looking for high-quality everyday pants without any expectations or are our pants our field office, where we keep neatly organized notes, pens, field equipment, knife, etc.?

The easiest (first) selection is between military and tactical pants. For military, airsoft, mil-sim and everything in this area, military pants are an obvious choice. Helikon-Tex Combat Patrol Uniform will definitely not let you down. Ripstop not robust enough? Choose CPU NYCO. Yes, the CPU models can still be used for everyday commute, but do not expect the same comfort as with tactical pants. You will get a wide cut, high waist and huge cargo pockets. If you want go even further, have a look at the Clawgear Raider models. For everything else here are tactical pants.

Looking for low-profile everyday pants with more functionality than your average jeans? We recommend – tactical jeans! Relative novelty which spreads like wild fire. In appearance they look like classic jeans, but are made of elastic material that allows freedom of movement. You can choose between models Pentagon Rogue, Clawgear Denim and the newest member, Helikon-Tex Greyman. Pants usually have hidden pockets on the inside of the waist and/or a smaller pocket on the thigh. Helikon-Tex UTP denim pants stand out with 12 pockets and are basically ‘traditional’ tactical pants, just made in denim/jeans.

If you are looking for a mobile field office for field work, practical shooting, professional use, etc. Clawgear Defiant are one option. With reinforcements harder to spot, smaller and less obvious side cargo pockets and low-profile smaller pockets. The material is robust, slightly less elastic, but the cut does not restrict movement. In a word: multifunctional.

Helikon-Tex Urban Tactical Pants remain our best-selling model with a record number of pockets. Comfortable for wearing and with high functionality and a lot of options for organizing equipment. The Ripstop model remains the first choice because of its breathability and being lightweight and stretchy. Canvas model is recommended only for winter or for hard abrasion: foresting, riding, motorcycling etc. Less elastic which is compensated with a wider cut.

Helikon-Tex Covert model is the only synthetic ​​model, made of lightweight softshell nylon. Pants were made as a substitute for a more elegant pants, which would still offer higher functionality with hidden pockets.

For the most demanding users we have Clawgear Operator pants. Declared as combat pants but low-profile enough to be used as a more serious tactical pants. Made of robust NYCO ripstop material, which can withstand the most in this bunch. Optional external plastic knee pads.

Those who would prefer to use tactical pants for hiking, sports, and for outdoor activities, we recommend Helikon-Tex Outdoor Tactical pants. With a number of useful pockets, the same cut as UTP, but made of light, breathable water repellent softshell nylon. Our first choice for hiking and bad weather.

We hope we helped to make an easier choice. Of course you are always welcome to contact us by phone or e-mail with your questions. And, of course, do not forget the ‘sacred rules’ of tactical and military equipment: “one is none” and don’t satisfy with just one pair.