A backpack as we all know is a bag that rests on your back and has two straps that run over your shoulders so you can easily carry it without having to use your hands. While this might be nothing new to you there’s another sort of backpack that got rather popular over the last years.

This “other type of backpack” has a single strap that runs across your chest from your left shoulder to your right hip or vice versa. Almost every manufacturer has their own name like “sling backpack” “slingpack” or “gearslinger”.

So why would you place all the weight of your gear on one shoulder when you could use both? These packs have one big benefit over traditional backpacks: You can just draw them from your back to your front and access the contents in one smooth movement. You don’t have to put down the whole pack or have it dangling over one shoulder if you’re searching for stuff in it.

Most manufacturers build their slingbacks a bit different to traditional backpacks. While backpacks normally open at the top or at the front, this kind of bags mostly have two-way-zippers that go around the whole bag so you can open them just so much that things won’t fall out no matter the current orientation. They will always be accessible from the top – it’s worth noting that “top” is what normally is the side when you look at it like a regular backpack. Some manufacturers even go so far that they build the inner pockets and loops in a way that they are easily accessible from the top and from the sides. Some packs have slanted pockets, some have pockets with access from both sides. Being able to move a backpack easily from your back to your front might come in handy in other situations as well. Think of commuting by public transport. When you’re able to grab a seat you don’t want to remove your backpack, stow it in the luggage bin (if there is any) and then take a seat just to do the reverse 10 minutes after when you leave the bus. A slingpack can just be moved around so you can take your seat and be moved back when you get off the bus. Because the bag sits on your chest you won’t annoy anyone around you by “sidebagging” (it’s a thing, search for it on the internet) and you don’t have to be on the lookout if someone likes your bag so much that they just take it with them. Speaking of potential theft: In crowded places some people tend to move their backpack to their front so they can keep them safe. Of course that’s more easily done as well with a slingpack.

Like with any benefit there are drawbacks, too. That’s why there are still traditional backpacks around. Carrying loads across your back while they rest solely on one shoulder is by far not as comfortable as a two-strap-bag. That’s the reason why there are only rather small bags with only one strap. There are different ways to mitigate that issue – just find the one that fit’s best for you. 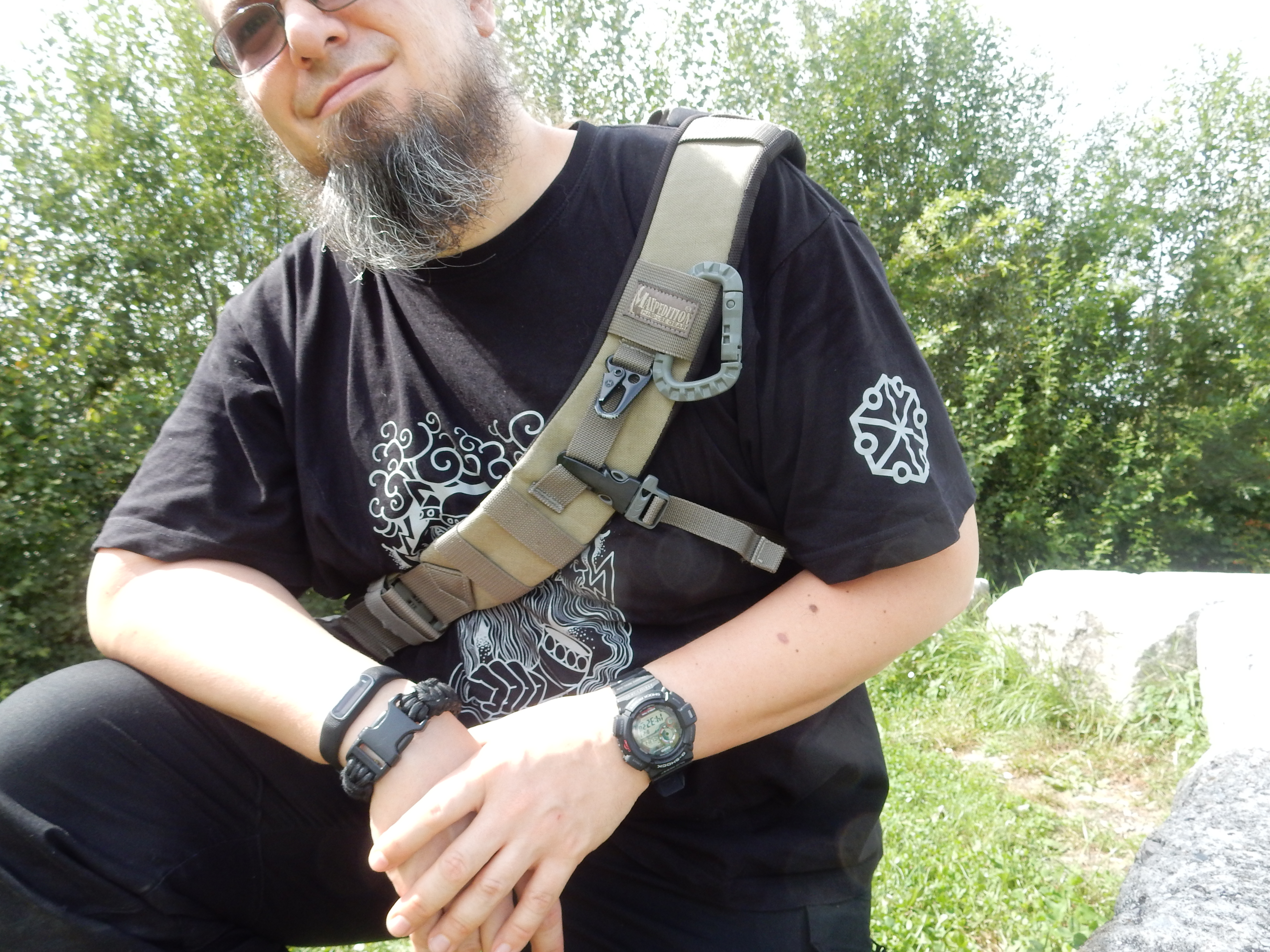 How I use it

Well, mostly as intended. So when I think I can get along with a small daypack I sometimes go for a regular backpack and sometimes for a single strap bag. Since I’m more a tactical gear nerd than a mere user I just use the make and model I’m currently in a mood for. I don’t always chose it by what I could use the most but just what tickles my fancy right now. I like the option to grab things from inside without having to put it down and I think they are easier to put on and off, too. So when I run errands and I know I have to actually put it off regularly (like when driving a car) I like how easy that’s possible. In that case I normally stow the stabilizing strap (if there is any) and only get it out when I know I’ll be carrying the pack for an extended time.

So in short, when do I use it? I use bigger slingpacks when I go to the gym. All sizes of slingbags for errands/shopping trips or walks into the city. I don’t use them for traveling or business trips because my notebook alone is big enough to not fit into most slingbags and I carry too much gear on these trips so I won’t put that all on one shoulder.